The myth of the page fold: evidence from user testing

As web professionals, we all know that the concept of the page fold being an impenetrable barrier for users is a myth. Over the last 6 years we’ve watched over 800 user testing sessions between us and on only 3 occasions have we seen the page fold as a barrier to users getting to the content they want.

In this article we’re going to break down the page fold myth and give some tips to ensure content below the fold gets seen.

What is the fold?

Above the fold is a graphic design term that refers to important content being on the upper half of the front page of a newspaper. It’s commonly used on the web to describe the area you see on a web page before you have to scroll down the page.

Why we don’t worry about the fold

People tell us that they don’t mind scrolling and the behaviour we see in user testing backs that up. We see that people are more than comfortable scrolling long, long pages to find what they are looking for. A quick snoop around the web will show you successful brands that are not worrying about the fold either: 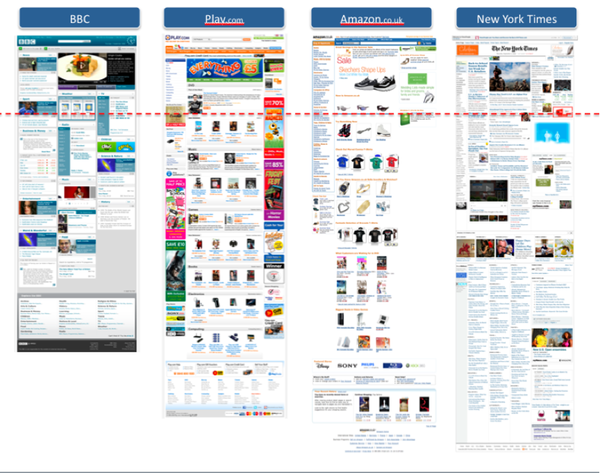 When we user test here at cxpartners we use an eye tracker. The eye tracker lets us see what the user sees. We then take the combined eye tracking data from each study and produce a series of heatmaps. The heatmaps show us what as a whole the user group is looking at.

One of the most common things we see on a heatmap is a strong hotspot over the scrollbar. The scrollbar is used to assess the page length. Users expect to have to scroll. The heatmap below shows this.

The image below shows some recent eye tracking work we did with Bristol Airport. The screens show two different design treatments for the hero slot (the large, prominent image area) on the homepage. The surprising thing we learnt was that actually having less above the fold (one large content block as opposed to 2 smaller ones) encouraged exploration below the fold. 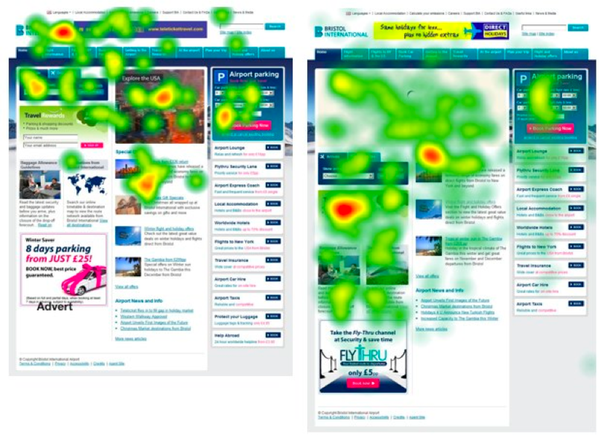 When there is not exploration below the fold

As we mentioned in the introduction there have been 3 occasions where there was little exploration below the fold. In each case the cause was the same.

One of these occasions was some user testing work we did for First Choice last year. The page below, a very long one, caused problems as users were not scrolling down the page. 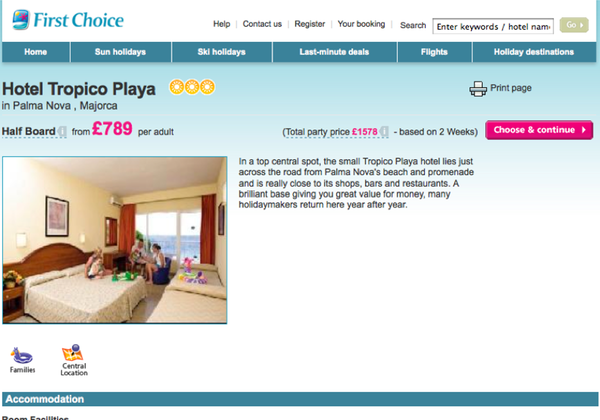 The long blue ‘Accommodation’ heading was acting as a barrier. This is the common theme - strong horizontal lines across the page discourage scrolling.

First Choice have now fixed the horizontal line issues and have content just showing above the fold.

We can offer three design tips to ensure content below the fold is seen.

This article was co-written by Joe Leech

Just some clarification. On all our testing set-ups we force the browser size to be 1024 x 740 px. This puts the average page fold at around 700px on screen shots above.

Our research shows the most effective place for content is above the fold, no surprises there. We are saying that people do scroll. Users scroll if there are cues to scroll and no design barriers to scrolling.

Richie Lee make a really good point below about bordering content to  give a further visual cue that there is further content below the fold.

There are some tips here for designing e-commerce product pages and forms with further tips on dealing with the fold:

Fiz is our Managing Director, but she's been many things. She likes pies and nuts.