I overheard a familiar conversation on the train to London the other day. The ticket inspector was explaining to a passenger that their ticket was no good, the conversation went something like this.

The passenger had to buy another ticket, or risk a penalty fare.

This got me thinking (As I looked down to check my own ticket). No wonder they didn’t know what train they were allowed to catch. These tickets make no sense. They are designed for ticket inspectors. Not for travellers.

cxpartners has conducted a lot or research in the rail ticketing industry, helping to improve the ticket booking process for theTrainline.com and Virgin Trains. We have seen the problem of people not understanding the validity of their tickets before and made this clear during the ticket booking process. Inevitably some users still buy tickets which they don’t understand, and get into trouble when they get on the train. We've also heard that Passenger Focus have conducted research with similar findings. I wondered if redesigning the train ticket could help ease the problem.

Train ticket redesigns have been attempted before. For example in Robert Hempsall's article where he redesigns the ticket to combine several returns onto one ticket. We wanted to take it one step further and create a redesign based on user research.

I wanted to set some rules for this redesign. I wanted to redesign the ticket based on its current parameters and printing techniques. It should be a design that they could start using now across all rail networks.

I want to focus on the most complex ticket that causes the most problems. The two part advance ticket. There are three main issues with this ticket.

An advance ticket requires you to have two tickets. One for the train ticket and one to say what train and seat you need to be in.

Travellers often don’t realise they need both parts. People in user testing say that when a seat is booked for them they usually don’t sit in it. How often do you see reserved seats with nobody sat in them? People see the reservation part of the ticket as irrelevant to their needs and often disregard it.

Splitting the ticket in two parts seems unnecessary. It increases printing costs for the train companies and causes confusion for the passengers. The two tickets actually repeat a lot of information. The only unique information on the reservation part is the seat number, the time of the train it is valid on and the reservation code.

These two tickets need to be combined into one.

Understanding when the ticket can be used is a big issue. These tickets try to explain validity in six places. This makes finding the actual validity more difficult

On the ticket itself under the heading ‘Validity’ it says ‘BOOKEDTRAINONLY’. Where people expect to see validity, they are being told ‘GO LOOK SOMEWHERE ELSE’. Not very helpful. 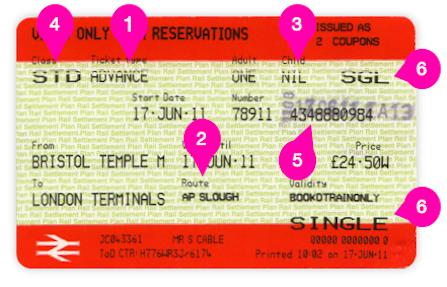 1. Ticket type ‘Advance’ is not clear. Travellers need to know when the ticket can be used, not what it's called.

3. Adult one, child nil. If the traveller has no children with them, they don’t need to be told.

4. Class and price is not so important for travellers as they will know what class they bought and for how much. However this is important for the ticket inspector to be able to see.

5. The ticket number and the reservation number are no use to travellers whatsoever, and I’m pretty sure ticket inspectors don’t use these either. However they will be needed for claiming refunds.

6. SGL and SINGLE?. Has ‘SINGLE’ been added because understood SGL?.

The information design of the ticket should be based on what is most important to travellers.

Our solution focuses on three things. Combining the ticket and reservation, making the validity completely clear and prioritising information based on travelers needs.

Validity is the highest priority. The name ‘Advance’ is still there, but it’s pushed back against the time and date information. This is also backed up with ‘If you miss this train you’ll have to buy another ticket’, telling travelers in plain English, not rail industry jargon.

Seat number is next to the validity date. It’s big as travellers will be reading this as they are walking up and down the trying to find their seat. So readability is important.

SINGLE is a high priority. Having SINGLE/OUT or RTN helps you pick out the right ticket when you are trying to show it to the ticket inspector.

Number of passengers, class and price are visually demoted. I’ve used the word standard instead of STD making it completely clear.

Route is also demoted, but I’ve added in some helpful information for travellers. If there is a choice of route, its suggests which route would be quickest. If they are limited to one route then let them know if there is an interesting landmark to look out for on their journey. This probably wouldn’t be possible but it’s a nice idea.

Finally ticket number and reservation number are visually demoted and put in the top corner out of the way from all the key information.

Why this needs to happen

A user centered re-design of the printed UK train ticket is fundamental in the short term. While new technologies like print at home ticketing and mobile ticketing are available, their use is growing slowly.

A redesign for the UK rail ticket will benefit travelers and the rail companies alike.
Travelers will be less confused about when their tickets are valid and fewer people will get on the wrong train. It will reduce ticket printing costs. It will also save a lot of hassle for ticket inspectors having to explain validity to travellers and reissuing tickets. Making the tickets clearer should also reduce the amount of travellers applying for refunds, reducing admin costs for the rail companies.

ATOC, if you're listening, we’d love to work with you on this.

Steve has spent the last 8 years at cxpartners trying to write the perfect biography for the website. Has a medium cat